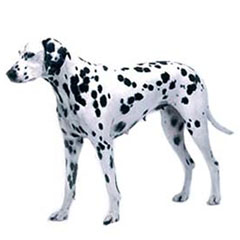 Scattered throughout the art of ancient Egypt and Greece is a spotted dog striding alongside horse-drawn chariots that could be the ancestor of the Dalmatian. The Dalmatian has gone through many progressions of type through the centuries, yet has always remained recognizable. He was found in many parts of the world, perhaps through his wanderings throughout Europe and Asia alongside Romani gypsies. The breed's first documented place of origin was Dalmatia, a province of nineteenth-century Austria to the west of the former Yugoslavia, along the Adriatic Sea. It was from Dalmatia that the breed derived its name. Even so, the Dalmatian has had many names from the many countries that claimed the dog as their own. Most notably, the English gave him a number of nicknames, among them English Coach Dog, Carriage Dog, Plum Pudding Dog, Fire House Dog, Spotted Dick, and Talbot(which assumed he was descended from the Old English hounds). The breed, however, is definitely not a hound. AKC has placed the Dalmatian in the Non-Sporting Group despite his resemblance to the Pointer, his ability to track and retrieve, and (with training) to be worked as a gun dog. Some owners have utilized him as a draft dog, a shepherd, and a sentry. Of course the Dalmatian's foremost job has always been working alongside horses as the pre-eminent coach-dog. This is an in-bred instinct developed over centuries of useful skilled labor.

Dalmatians are fine pets for both country and city living. They are responsive to training from a persistent, firm handler. They can be quite good with older children, but they may be too excitable for very young kids. They are willing to please despite a streak of stubbornness. They can be extremely excitable or nervous. Some are destructive chewers and occasionally Dalmatians can be born with a shy temperament which can lead to serious behavior problems. They are instinctive guard dogs and very active both indoors and out. They are energetic and athletic and must be socialized with children as puppies. They are among the worst dogs to acquire from a non-selective breeder, or from the puppy-mill operations which supply most pet stores. Such dogs become overly dominant, aggressive, highly nervous, shy, and distrustful of strangers, and do poorly with other dogs. These characteristics are not typical of a well-bred Dalmatian.

The Dalmatian is one of the most distinctive-looking dog breeds. It's not simply his appealing coat with its clearly-defined round spots of black or liver standing out boldly against a pure-white background; his clean limbs, normal balance, well-proportioned, muscular body, and beautifully tapered tail all contribute to an eye-catching dog. In the United States the Dalmatian is expected to be between 19 and 23 inches tall from the shoulder down and weigh between 45 and 65 pounds. Puppies are born all white, with the spots developing between 2 weeks and 6 months.

Despite their stubborn behavior, Dalmatians respond well to obedience training provided they have had the benefits of socialization as puppies and the training begins at an early age. They require a slow, firm approach throughout the teaching process. At times, the trainer must be assertive and insistent in order to overcome the breed's excitability and nervousness.

Their short, smooth coat is easy to keep clean and maintained. However, they are great shedders. To live comfortably with this, the owner must brush the coat several days a week with a rubber curry-type brush, which is used for short-coated dog breeds as well as for horses. It is possible to stay ahead of the shed hair by rubbing the dog with a damp terrycloth towel after each brushing. Exercise and a veterinary-recommended diet also help reduce the shedding.

Pongo, Perdita, and the puppies of the 1961 Disney animated classic "101 Dalmatians."

© Copyright 2014 LifeLearn Inc. Used and/or modified with permission under license.