"The State Dog of Wisconsin" 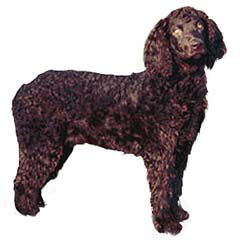 A medium-sized dog, slightly longer than tall, the American Water Spaniel may be liver, brown, or dark chocolate. They have a wavy coat ranging in texture from uniform waves to close curls, with especially long hair on the ears. The rounded eyes should harmonize with the coat color and the long tail should curve slightly, carried near the level of the back.

An enthusiastic learner who can get easily distracted during training, the American Water Spaniel does best when motivated by treats or by fetching games rather than force. Bullying is especially counterproductive because of this breed's sensitive, even timid, nature. Early socialization goes a long way to making them more confident around strangers, and is especially important for this breed. With the right attitude and a gentle hand, the motivated owner can even get American Water Spaniels to perform advanced obedience exercises, but frankly, he would probably be happier if you just chucked all the drilling and took him duck hunting.

That curly coat has an oily texture, which is good for repelling water, but not so good for the grooming-challenged. Even though American Water Spaniels don't leave shed hair around the house, they still need to be brushed at least once or twice a week to prevent matting and encourage good skin circulation. They may also need a monthly bath to keep clean and sweet-smelling. Check those long ears for wetness and irritation regularly. Brush teeth daily and trim nails every week or two. Some Water Spaniels drool or drip water after drinking, so keep a drool rag handy - immaculate housekeepers, you've been warned. To stay healthy and fit, American Water Spaniels need an hour of vigorous exercise every day, in the form of running, swimming, hunting, or backyard games, especially fetch.

The American Water Spaniel's biggest health concern is mitral valve disease of the heart. Two other cardiac-related problems, pulmonic stenosis and patent ductus arteriosis, are also of some concern, as is hip dysplasia. Ask your breeder about these issues.

The most famous AWS of all was that first registered one, Pfiefer's own dog named Curly Pfiefer.

© Copyright 2014 LifeLearn Inc. Used and/or modified with permission under license.